I created this visualization as part of a larger group project about food security in Athens-Clarke County for my journalism capstone class.

Jessie B. Denney Tower, a 10-story, low-rise brick building that sits steps from downtown Athens, is an affordable housing community that houses some of the most in-need Athens residents. The building is designated by the U.S. Department of Housing and Urban Development for the elderly and people above age 50 who have Social Security disability benefits. Denney Tower is also in a food insecure area, according to the USDA, which categorizes the area as “low income and low access” because the nearest grocery store is more than a mile away.

Why It’s Newsworthy: “Food desert” and “food security” are buzzwords used to describe geographic accessibility to food, but the cost of healthy food is a bigger issue. One resident took matters into her own hands to prepare lunch for neighbors using donations.

According to Marilyn Appleby, communications director and property manager at Athens Housing Authority, which owns Denney Tower, the majority of Denney residents have Social Security benefits on the low end. Before retiring and moving into Denney, “they worked physical plant jobs, textile mill jobs, things like that. They always worked, but they worked in lower-wage jobs.” Most residents receive about $650-$850 a month, and 30 percent goes toward rent, Appleby said. At Denney Tower, all utilities are covered, and cable is offered at a half-price discount.

Sometimes, local businesses, organizations or individuals provide donations and meals to the residents, such as the Northeast Georgia Food Bank, Campus Kitchen and American Lunch, a food truck operated by Five Bar Athens. Congregate meals are offered daily at local churches or at the Athens Community Council on Aging for $2-3 per meal. However, many Denney residents feel that a $3 meal every day is not financially feasible.

Prior to this past summer, Denney residents enjoyed socializing over Tuesday lunches of soup, bread, and tea from American Lunch. However, this past June, the truck stopped coming because it needed repairs and volunteers were scarce, Appleby said. Five Bar was unavailable for comment at the time of publication.

Although the truck was missed, its absence “created a social responsibility on the part of residents,” Appleby said. Barbara Morgan, a Denney resident of nine years, decided to informally pick up where the truck left off. Using donations from other residents, she cooks a weekly Tuesday meal to be shared with neighbors in the common area in the Denney Tower lobby.

“We look forward to Tuesdays,” Sherry Nesbitt said, a friend of Morgan’s.

Morgan places cornbread into a bowl of soup for her neighbor at Jessie B. Denney Tower on Sept. 28, 2018. Morgan has cooked Tuesday lunch for her neighbors at Denney Tower since the American Lunch food truck broke down and was no longer able to come serve soup. “Ms. Barbara does so much for us,” said neighbor Lizzie Mae Mcleroy. (Photo by Christina Conner)

Morgan shows off one of the sunny areas filled with plants at the tower. Morgan takes care of several houseplants on two floors. Pothos vines climb the green walls and plants sit in terracotta or makeshift pots made of recycled materials. (Photo by Christina Conner) 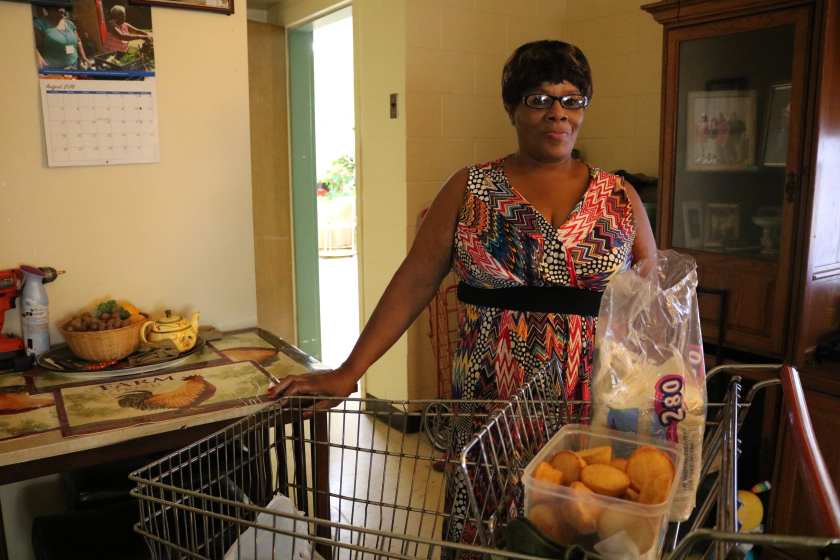 Barbara Morgan poses in her apartment at Jessie B. Denney tower with her cart, which is loaded with lunch essentials like bowls, utensils, and a pot of chicken stew on Sept. 25, 2018. With the help of a friend, Sherry Nesbitt, Morgan brought the food down to a group of residents in the Denney lobby. Of the 114 apartments in Denney Tower, 39 are one-bedroom, like Morgan’s, and the remaining 75 are studios. (Photo by Christina Conner)

Precious, Morgan’s dog, watches with caution as Morgan and Nesbitt load the lunch cart in Morgan’s apartment. Jessie B. Denney Tower allows pets, and many residents are also pet owners; they enjoy the company of their furry companions. (Photo by Christina Conner)

A food insecure area is also commonly referred to as a food desert. “A food what?” Morgan said.
The CDC defines food deserts as: “areas that lack access to affordable fruits, vegetables, whole grains, low-fat milk, and other foods that make up the full range of a healthy diet.”

Many of the residents of Denney don’t realize that the building is in such an area or don’t find the physical distance to be a barrier to eating healthfully. Morgan has a car, and other residents go shopping with family or use the bus. A bigger barrier to healthy eating is cost. Appleby said Denney residents realize canned foods are less nutritious than fresh produce, but want to stretch their limited incomes as far as possible.

The bottom line is when you’re watching your money, you’re not going to be doing things like buying fresh vegetables,” Appleby said.

In the meantime, American Lunch has fixed the truck and plans to resume service at Denney Tower on Oct. 2, 2018.

Flowers are blooming, bees are buzzing, and workers and volunteers are pruning, watering and collecting data on plants at the Trial Gardens at the University of Georgia. Trial Gardens staff will open the facility to the public at their annual open house on Saturday, July 21, from 8 a.m. until noon.

The Trial Gardens at UGA are operated by the Department of Horticulture in the UGA College of Agricultural and Environmental Sciences.The Trial Gardens are open to the public every day of the year, but the open house gives friends and fans a special opportunity to get a behind-the-scenes tour of the gardens and to have their plant or garden questions answered by Coker and Professor John Ruter. Ruter is the Trial Gardens director, a plant breeder and author.

The gardens are home to the newest varieties of plants from breeders across the country. They serve as a testing ground for the plants’ abilities to withstand the unpredictable, hot, humid summertime climate of the Southeast. Visitors can check out new varieties of annuals and perennials, like hibiscuses, begonias, caladiums and hundreds of other plants. This summer, the garden has more than 350 plants on trial as well as countless perennials from growers across the country.

The event is open to everyone from avid gardeners to people who simply enjoy strolling through a colorful, lush garden.

“Some (attendees) may have been gardeners for 50 years, and some may have started gardening this past spring,” said Coker. “But either way, it’s a good opportunity for gardeners to come mingle and learn more about the newest varieties.”

The open house is pet- and kid-friendly, so bring the whole family for a day in the garden. Hokulia Shave Ice will set up a tent where visitors can grab a cool treat while they peruse the gardens. A $5 donation is suggested to help maintain the gardens.